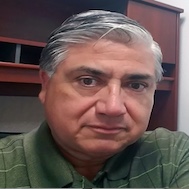 Americo Yacopi is the Academic Advisor at the SDSU-Imperial Valley campus, located about 2 hours east of the main campus in (very!) sunny Calexico, CA. He presently advises for the Liberal Studies major and History/ Social Science major. He has also advised in Criminal Justice, Psychology and Latin American Studies, and has collaborated in organizing the logistics for various campus events like Commencement. In addition, he serves as the IVC's EOP Coordinator.

A core component of EOP’s presence on the campus is that it sponsors the EOP Learning Center, its main tutorial facility for students. Americo is a Valley native who, like many of the campus’s transfer students, attended Imperial Valley College and continued his education at SDSU-Imperial Valley. He majored in Psychology but, after needing some elective classes which he decided would mainly be English, he double majored in English (Single Subject Teaching).