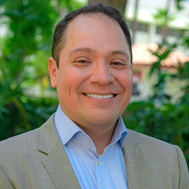 Dr. Alberto Esquinca earned his Ph.D. in Education with a specialization in Language, Literacy and Learning from the University of Southern California in 2006. Prior to joining SDSU he was an associate professor of bilingual education at the University of Texas at El Paso. He researches emergent bilinguals’ (trans)languaging and language practices in academic contexts. He is particularly interested in language practices in science, engineering, technology and math (STEM). He is the Principal Investigator of a study on language practices in hands-on, inquiry-based engineering in an elementary dual language program. In addition, as PI of an ethnographic study on the role of identity formation among Latinx students in engineering studies, he secured funding from the National Science Foundation. He is the co-author of a forthcoming book titled Educating Across Borders: The Case of a Dual Language Program on the U.S.-Mexico Border.

(University of Arizona Press). Most recently, he is the Principal Investigator on a study of the use and implementation of hands-on, inquiry-based engineering learning in a dual language program.

Dr. Esquinca also researches the issue of resilience and persistence among Latinx youth from an intersectional perspective. He was the Principal Investigator of an ethnographic study on the role of identity in engineering studies funded by the National Science Foundation.

A native of Ciudad Juárez, México, he spent more than a decade of his life crossing the international border to attend school in El Paso, Texas. Because of these formative experiences, Dr. Esquinca is passionate about highlighting the unique perspectives of immigrant/transnational youth.