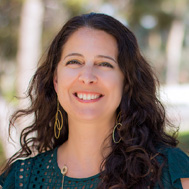 Katherine (Katie) Sciurba is Assistant Professor of Literacy Education at San Diego State University, Director of the SDSU Literacy Center in City Heights, and Director of the SDSU Reading/Literacy graduate programs. She is an experienced elementary school teacher and, for nearly 20 years, has taught writing to K-12 children in after-school and intervention contexts. Her research focuses on the intersections of young people's identities and literacy practices with an emphasis on the reading experiences of Boys of Color, popular culture as a vehicle for literacy instruction, and representations of race, gender, and current/recent historical events in children's literature. She holds a Ph.D. in English Education from New York University, an M.S. in Elementary Education from Mercy College, an M.F.A. in Writing for Children from The New School, and a B.A. in Literatures of the World from the University of California, San Diego. Her scholarly work has been published in venues such as Teachers College Record, Journal of Literacy Research, Journal of Adolescent & Adult Literacy, and Children's Literature in Education, and she is the author of texts for children including the picture book, Oye, Celia!: A Song for Celia Cruz (Henry Holt, 2007).