STUDENT SPOTLIGHT: At the Intersection of Identities, a Helper Finds Her Path 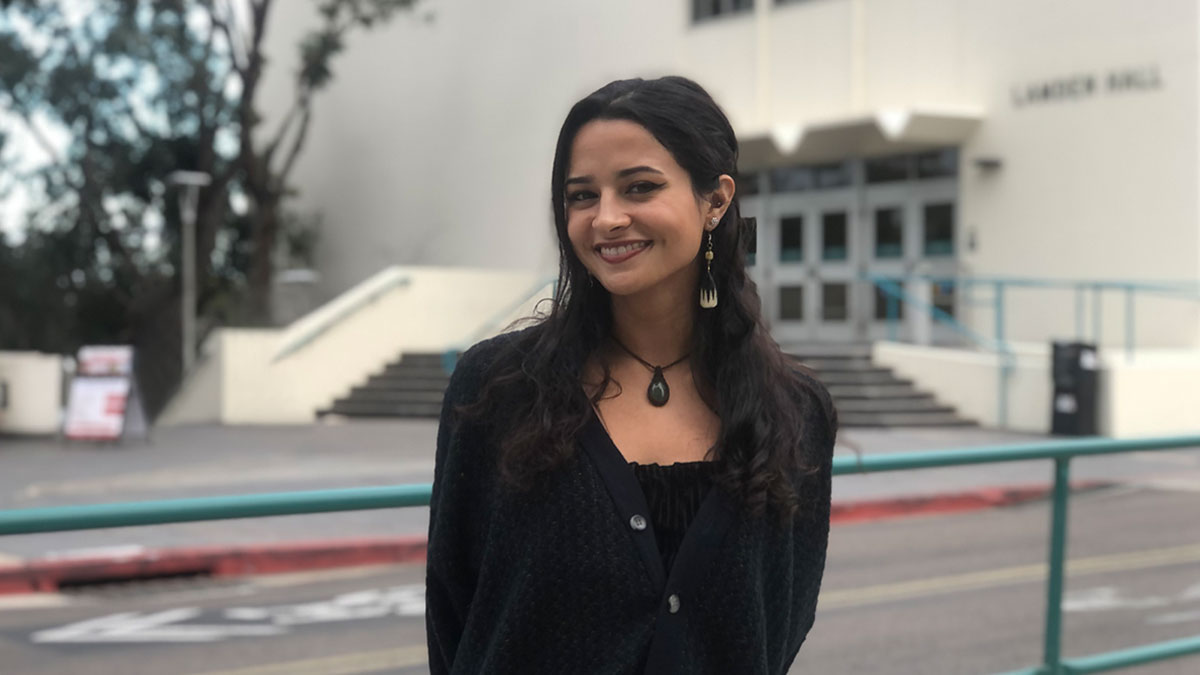 Sanchez, a master’s student in San Diego State University’s child development with a concentration in early childhood mental health program, likely understands this better than most. She’s the daughter of Panamanian immigrants. She proudly identifies as a military brat. And — as of a year ago — she’s a member of the Deaf/Hard of Hearing community.

"We all have so many identities, and they're intersecting at all times,” Sanchez said. “I think that's an important thing to consider when we're in this field. I feel like all the things I've learned on my own journey are things that I'd love to share with other people. And if I have that to share, what do other people have to share that I get to learn from?

“I find early childhood mental health to be an enriching and empowering field.”

It’s a field that has felt like a calling for much of her life.

Sanchez, who attended high school in Chula Vista, said she has always gravitated towards being a helper. Much of it, she suspects, was picked up from her mother Irina, a nurturing and supportive figure to Lou and all her friends growing up. Lou was a fast study — so much so that throughout her schooling, she was often asked by her teachers to assist classmates in moments of crisis.

“I was always the kind of kid who helped other kids in the classroom," Sanchez recalls. "Stuff like that really showed me that it was something I was passionate about. — just helping. It was really natural.”

Sanchez’s upbringing in a military household — her father Aquilino served in the Army — also kindled her interest in mental health. All around her, she saw a white-picket-fence facade that often hid the realities of post-traumatic stress disorder, disabilities or, as in her home, coming to terms with assimilating into new American identities.

Her undergraduate studies in child and family development at Long Beach State not only cemented her passion, they also helped her bring mental health concepts to her own family. Discussing mental wellbeing, she said, was a foreign concept in her family’s Panamanian culture. Awareness of and access to services, meanwhile, were practically nil.

Sanchez has worked hard to change the dynamic.

"I was able to bring mental health awareness into my family and we all became very passionate about it,” she said. “It was something very new for both my parents and my brother, and it was something we all learned together. That process ignited my passion as well because I realized that it's very hard to get those tools, and get them in a way where a family — especially an immigrant family — can really digest them."

Sanchez’s journey of personal discovery took an unexpected turn last year, when she suddenly experienced a change in hearing levels, including deafness on her left side. Since then she’s adjusted to new realities — including wearing a hearing aid — all while finishing her bachelor’s degree in Long Beach and starting a master’s program at SDSU.

It hasn’t always been easy.

She’ll often find herself unable to hear a professor in class as her hearing aid picks up faint conversations from other parts of the classroom. She’ll occasionally lose the thread on conversations in social situations. And don’t get her started on the challenges posed to listening comprehension by mask-wearing during the pandemic.

“I'm learning how to express what I need and how I would like to be understood,” Sanchez said. “I need accommodations because the world's not entirely accessible, and I think we all know that. And as I began to navigate the hearing world from a new lens, I’ve come to see the many big and even subtle differences/challenges faced by the Deaf/Hard of Hearing community.

“And it’s important to note and recognize how even that recent shift in knowledge comes from a place of privilege.”

Sanchez, who is currently working to learn American Sign Language and eagerly exploring Deaf/Hard of Hearing culture, says she is currently “deconstructing my internalized hearing culture” — a process she finds both enriching and complex.

The experience has also shed light on her own upbringing, as she saw her father — who is hard of hearing because of his experience in the military — unaware of the resources that might have helped him.

“Once I embarked on my own Hard of Hearing experience, it was so devastating to come to terms with the lack of resources and the barriers of stigma that could have been broken down earlier to better assist my father with the communication differences,” Sanchez said

Aspiring to make a difference

After becoming a Licensed Professional Clinical Counselor (LPCC) through the program, Sanchez hopes to one day earn a Psy.D. and find a space where she can make “big decisions” and significant impacts. She’s also exploring working in early intervention for deaf and hard of hearing children — a role in which she can help parents understand the value of Deaf/Hard of Hearing culture and identity.

For now, her experience at SDSU is helping her on her journey to become the type of difference maker she would like to be. In addition to her master’s program, Sanchez is serving as a student assistant in SDSU’s Healthy Early Years (HEY) clinic, which provides low cost therapeutic services for young children and their families in the diverse San Diego community of City Heights. And in her program, she said she is beginning to feel a sense of “immense growth.”

"This is a very intensive field and I think this program brings up a lot of inner healing as you continue to learn about child development,” Sanchez said. “In that process, you're also reflecting back on your own childhood. I think it is something that everyone may be experiencing in this type of program.

“And I think that's a beautiful thing — as complex and scary as that might sound."